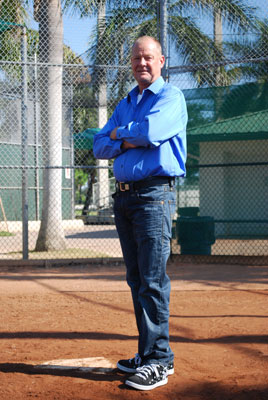 As an employee of the Royal Palm Beach Parks and Recreation Department, it’s Bobby James’ job to walk in the park. However, his experience with endocarditis, an infection of the heart, was no picnic. James had been having flu-like symptoms for several months, when suddenly they became unbearable. In addition to a high fever, night sweats and difficulty breathing, he had lost nearly 40 pounds in about 30 days. After running tests in April 2010, James’ family doctor, Jane Lamp, M.D., called cardiologist Rachel Eidelman, M.D., and sent the Loxahatchee resident to the Bethesda Memorial Hospital Emergency Department. “Infectious endocarditis is typically a bacterial infection on a heart valve. It can occur when people have bacteria in their blood stream, which then settles on a heart valve, usually a heart valve with an underlying abnormality,” said Dr. Eidelman.

While the 51-year-old Florida native had no history of valve or other heart problems, further tests showed the bacteria had caused a growth to develop on the heart valve, interrupting the normal blood flow and causing a murmur. After being admitted to the hospital, James was seen by infectious disease specialist Latha Srinath, M.D., who ordered a strong regimen of antibiotics. Dr. Eidelman ordered additional tests to check for any undetected heart conditions. “Dr. Eidelman was amazing. Before I went into surgery, she checked for blocked arteries and other underlying problems that could have existed,” said James. Six days later, James went into surgery expecting a mitral valve replacement by Geoffrey M. Lynn, M.D., medical director, Bethesda Heart Hospital. When he woke up, he was surprised to learn that Dr. Lynn had been able to repair his own valve instead.

Dr. Eidelman explained, “Thanks to Dr. Lynn, Mr. James won’t have to worry about taking blood thinners and may never need to have future valve replacement surgeries. Dr. Lynn was able to repair the native valve rather than replace it.”

“It was five-star treatment. The whole team at the Bethesda Heart Hospital knew what they were doing,” said James. “They didn’t treat me like a number. They explained everything and answered all my questions. They really wanted to help me get better.”

Following surgery, Bobby James’ recovery included rehabilitation and several weeks of antibiotics. To work his way back to good health, and the ball fields of the city parks, he started walking daily, working his way up to four to six miles per day. Five months after surgery, he is back on the field.